After realizing that he still had work to do, Spencer got help from Barak, his essay mentor. He was lucky that he had three weeks to spare!

This is the essay he submitted on the Common Application (the prompt was: Share an essay on any topic of your choice).

Click through each tab. Be sure to ponder and answer the questions as you go.

I lost it when Darius peed in the girls’ cabin.

Before we ask more specific questions, take some time to look at that sentence.

What do you notice?

What do you think about it?

What do you feel?

Then, did a little deeper.

What are your impressions of the writing and tone of voice

What facts are hidden in this sentence? There’s a lot of information about the setting and characters of the story.

What do you think about Spencer? Can you pick up any character traits from this? Any hints to his personality?

Before moving on, take time to get curious about these questions. This will help you build a deeper understanding of what makes a great essay.

Read the common reactions to the first sentence.

This is a great sentence. If Tina Fey read this Friday night at 7:30, she’d be thrilled.

In our live workshops, people smile and laugh. The mood of the room transforms.

People find a lot of details in these ten words.

Darius had probably been difficult before this happened, and Spencer had been putting up with a lot.

Most people think “lost it” means he got angry or upset, but some read it as “I started laughing” and Darius is his friend. There’s not yet enough information to know which is correct.

He makes people laugh, so maybe he’s funny. He is probably patient. And confident. He opens his essay admitting to losing it. He’s down-to-Earth, writing in a straightforward, conversational tone. He’s bold.

It takes some guts to use the word “peed” in the first sentence of your college essay!

(And, no, we’re not giving you permission to use language like that, unless it’s perfect for the story!)

If this were all you knew about Spencer, and learned that he (or she) would be your roommate, would you give a:

In our live workshops, about 50% of people give a thumb’s up, and 50% sideways. That’s impressive for ten words!

I lost it when Darius peed in the girls’ cabin. It was the end, the twisted climax of a week I will always associate with pure, unbridled pain.

Darius had been building to this all week. This eleven-year-old had become my sole responsibility for the week he was at YMCA Camp Orkila, and he was systematically breaking me down. My directors had told me to focus my efforts on him for the week he was here, because as a first-year counselor I could use the experience of dealing with a child like Darius. Yet in the seven years I’d been a camper here, I’d never encountered anything like him. Here was a child naturally skilled at wreaking havoc; harassing people and wildlife was an art form for Darius.

Before this week, all I’d wanted was to be a counselor. I wanted to support children and teach them to trust themselves, just as this camp supported me as a camper. I was ecstatic, and spent hours learning the best methods of managing children. But what about when your camper is fifty feet up a climbing tower and unstraps himself to taunt you? I realized that nothing I learned in the workshops had prepared me for Darius.

My drive to help others succeed was gone. After days of being positive with Darius, negative reinforcement became my best friend. It was all I could do to keep him in line.

Then, the finale. I’d been setting up for dinner when another camper told me that Darius had peed inside the girls’ cabin, and ran away to the forest. I led a four-hour search party tracking him down, and spent an hour cleaning the desecrated cabin. I was broken. The hours of mental depravity had gotten to me. For those last two days, I paid as little attention to Darius as possible. We only spoke when he created problems.

When Darius got on the bus to leave, I started breathing for the first time all week. But as he boarded the bus, he said something I never expected: “Spencer, thank you for this week. I had so much fun.” That moment still feels as raw today as it did two years ago, and I still can’t put what I’m feeling into words.

No one was waiting for Darius back in Seattle. His foster parents had abandoned him while he was at camp; CPS picked him up a few hours later. I still question myself about how I acted that week. Was I justified in how I treated him? Or was I simply too frustrated to dig deeper and help him, to support him? I tell myself I was only fifteen, it was how anybody that age would handle it. Maybe that’s true. But the idea that Darius is still out there, living a life in which everyone treats him the same way, still haunts me. It will for a long time to come.

Before you read the rest of the questions, look over the essay. Spend some time pondering it.

What are the first things you notice about this essay? They could be about the writing, structure, content, message or Spencer’s personality.

How is the essay structured? How is it different from school papers? What kind of writing is this?

How does Spencer use language? What do you think about this?

How do the sentences, paragraphs and thoughts flow together?

What kind of person is Spencer? What are his values and beliefs? How does he act in different situations?

What character strengths show up in the essay?

Which of these character strengths could describe Spencer, and where do you see them in the essay?

There’s no right or wrong answer—people may see different strengths. But, most people will see 8 or 10 strengths. This is why Spencer seems to be a real person.

Virtually everyone loves this essay and thinks Spencer is a great guy. We’ll take you through the conversations we have in our live workshops.

The Voice
People notice that Spencer’s voice is natural, down-to-Earth, and easy to read. People who know Spencer say it sounds exactly like him. It wasn’t like this in earlier drafts. He had the story down, but there were a lot of extra words and phrases. He had to polish and polish until it was just right.

The Story
There are several stories within this story; some of them originally were quite detailed. The scene of Darius unhooking himself from the safety line 50 feet up a tree started as two long paragraphs and ended as a short sentence in the form of a question. Spencer had to make hard choices to boil his essay down to the core of what he wanted to say.

The Emotion
Most people agree that they feel what Spencer feels when reading the story. He does this by bringing in details and sharing what he was thinking and feeling at the time. You know his motivations and feel his frustration and disappointment. That’s key to why this is so powerful—it’s easy to empathize with Spencer.

The Thoughtfulness
Spencer reflected deeply while writing this essay. At first, he didn’t know how important the experience had been to him. He’s a teenager, after all, and moving forward into the future. To write an essay like this, he had to look in the past and in the present. Spencer and his mentor had many long conversations picking apart the story, getting into the details of what happened, and exploring what it meant to him.

The Questions
Spencer doesn’t wrap up his essay with a nice conclusion or a profound thought. He doesn’t know what to make of what happened and doesn’t know if he ever will. That shows great maturity and humanity, which adults recognize easily, but teenagers sometimes miss. This is one of the most powerful aspects of this essay.

The Character
In Spencer’s earlier drafts, he said he was confident but comes across as cocky. In this essay, he says nothing about himself but leaves a deep impression of a good person with confidence, humility, passion, caring, and humor.

If this were all you knew about Spencer, and learned that he (or she) would be your roommate, would you give a:

In our live workshops, about 85% of people give a full thumb’s up, 10% waver between up and sideways, and 5% are sideways. Out of thousands of people, only a few have given a thumb’s down. There will always be someone who just doesn’t click, but those are impressive numbers.

Tina Fey is very happy! She’s not read this story 100 times, and she knows who Spencer is. 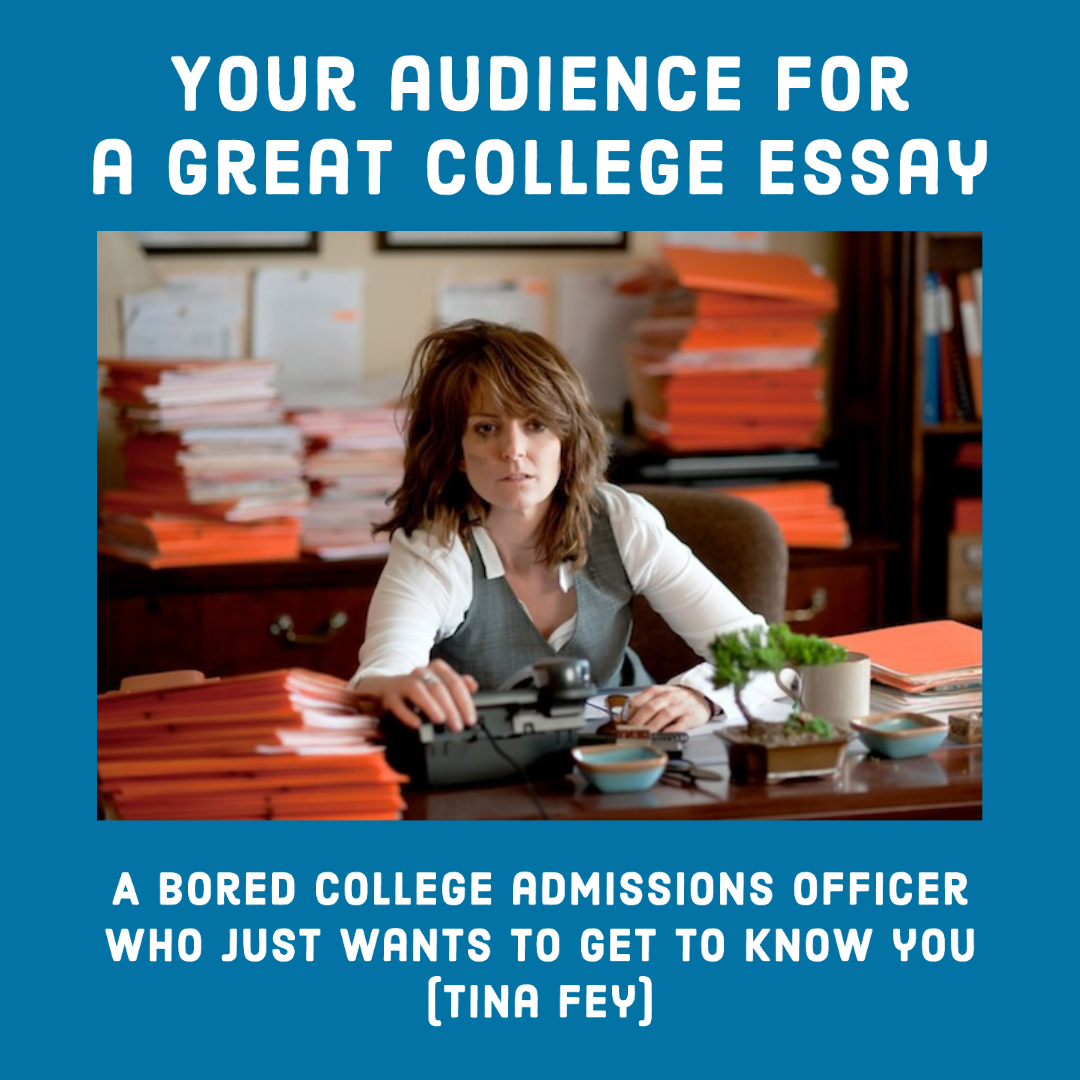 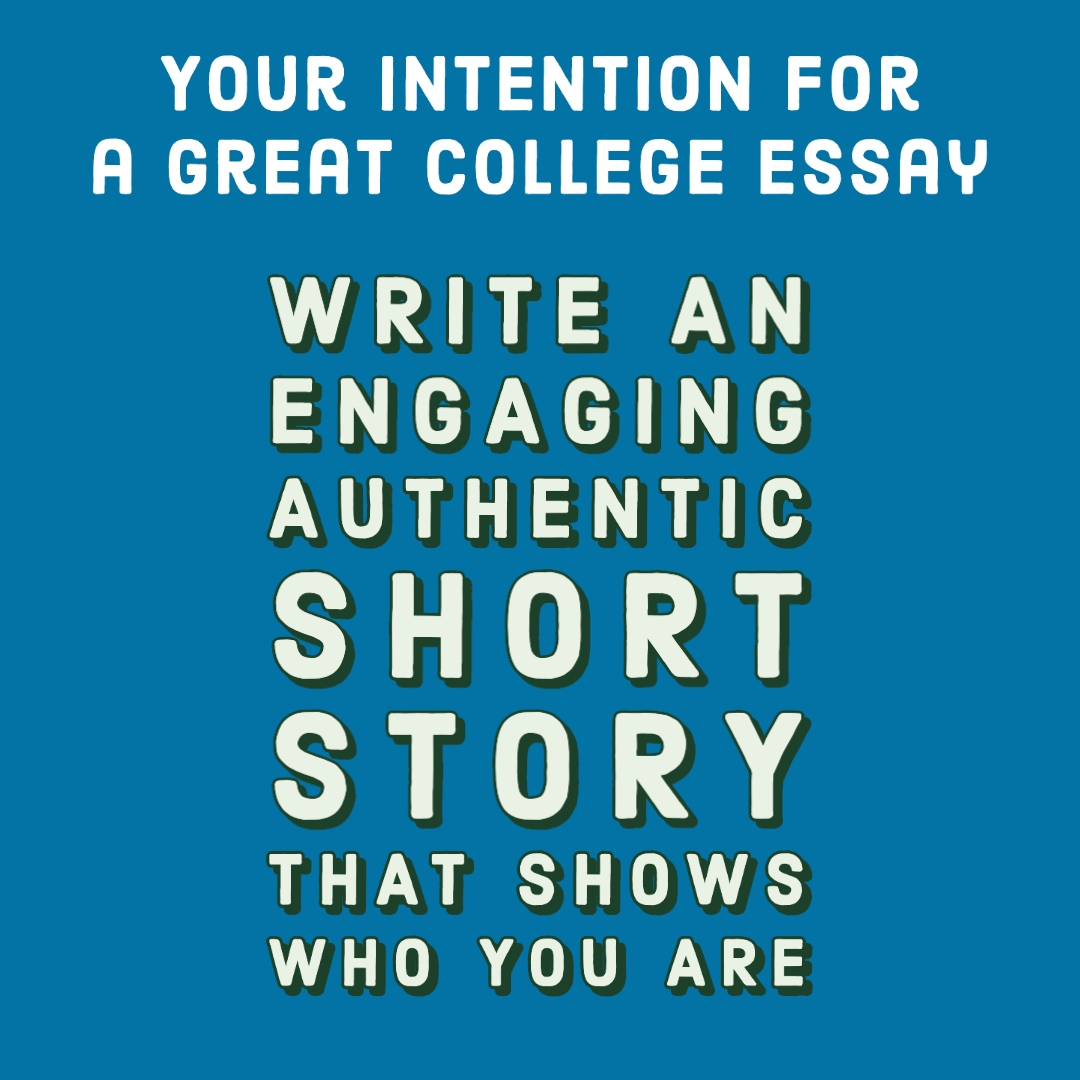 Spencer also knew his role.
As a writer, you need to find a role that will help you fulfill your intention so that you can succeed with your audience. You can think of it as the perspective you take.

For a college essay, if you play an academic role, or a salesperson role, you’re not going to write the kind of short story Tina Fey is looking for. 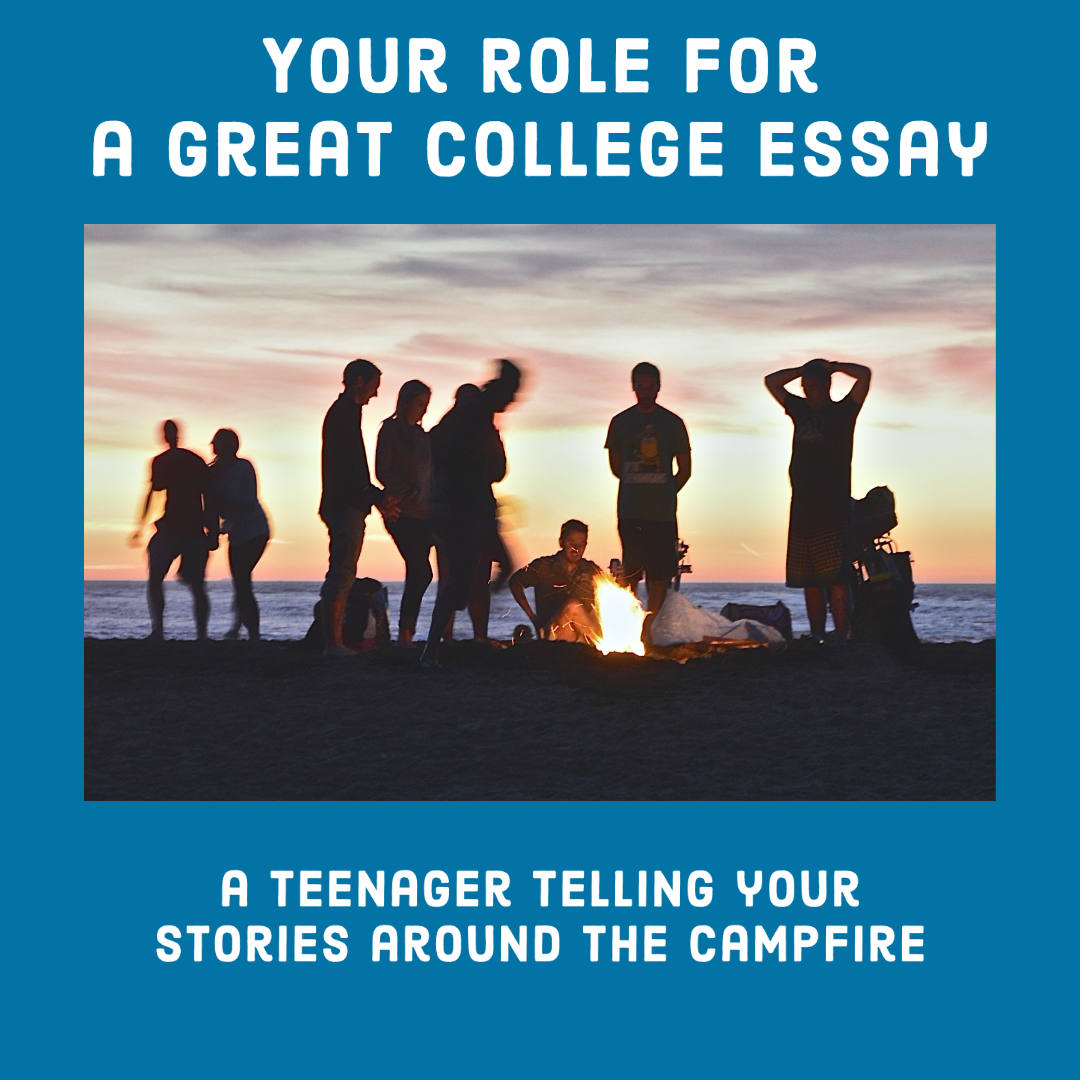 It’s that simple. Just tell your stories, like you’re talking to your friends.

Something that will always define me is the time I’ve spent as a camper at summer camp. Quintessentially part of any American childhood, summer camp is where I learned to be confident in myself, which has been incomparably beneficial.