What did Spencer have to do to write such a great essay?

Spencer had written the first draft of his college essay on his own. He was motivated (and his mother was thrilled).

But then he rewrote it the way he thought his English teacher wanted him to. Mom—a professional writer—didn’t think the new essay was very good.

Spencer wouldn’t listen to her. Of course not. He’s a teenager. Why would you listen to your mother?

Now with less than four weeks until the deadline, they were both more than a little stressed. 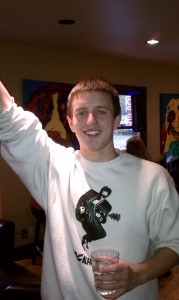 Spencer, moments after finishing his college essay. (The good one.)

Spencer had to forget everything he thought he knew about writing—and about himself.

At the end of three weeks with Barak and Essay Mentors, Spencer had gone on a journey of self-discovery, he had gotten curious about who he is in a way few high school students ever do, and he had learned new ways to tell his story powerfully and effectively.

That’s the same kind of self-discovery and learning you will get by going on your EssayQuest.